Icefish
Looking into aquaculture’s crystal ball
It’s a big ask to request a prediction of the future, but in the Blue Economy discussi...

Icefish
Tub manufacturer faces challenges and opportunities
Sæplast has been producing a range of tubs, boxes and other products in Dalvík and was... 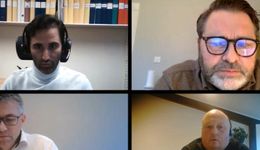 Capelin is booming in Iceland, but marketing and climate change remain challenges.

This was the takeaway from Icefish Connect’s session on the largest quota of capelin in 20 years and its impact on the Icelandic economy and infrastructure.

Both agreed the announcement of a 900,000t capelin quota was welcome after three lean years – with a small quota last year and two zero-quota years before that.

Quota is justified
Fleets are capable of catching this year’s quota, and there is enough processing capacity available, though marketing for human consumption is more challenging, said Mathiesen.

“There’s very good evidence to justify such a large quota this year,” he stated.

Discussing what the capelin allocation means for the industry, he explained: “It means there’s more raw material, more to process and more to market. It was noticeable last year how well the industry did in marketing the capelin with roe to the high-end market for human consumption.

“However, it is tricky to expand a market for human consumption when you have a limited supply over a number of years. I don’t think we can expect to double the delivery to this part of the market”

Strengthening capelin prospects is a strong demand for fish meal and fish oil as aquaculture is a fast growing market.

He agreed that a larger quota mean that the focus is on volume and therefore lower per tonne values – i.e., large-scale meal production and less frozen capelin products.

Overall export value terms for this winter season is probably going to be around ISK60bn, said Mathiesen.

Pelagic stocks squabble
On the subject of why there is a Capelin agreement in place, but not for the three other pelagic stocks in the North Atlantic, Mathiesen noted only Iceland, Greenland and Norway are negotiating for the Capelin quota, but there’s a higher number of countries involved in the other three.

“The changes in migration have been much greater there and there are countries involved with higher potential to catch these stocks than before. But also there is a history of disagreements over these stocks and a reluctance to accept the same conditions as before, particularly in light of changed distribution.” But if this isn’t resolved, everyone will suffer, he warned.

Will the quota change?
Speaking about whether the 900,000t initial quota could be subject to further adjustment based on research and landing figures as the season progresses, Bardarson said: “We will measure stock again in January and February and may readvise based on this.” Following this, a final catch quota will be issued early in 2022. A new index is now also being used by MFRI.

Forecasting under the climate threat
It is possible to forecast capelin abundance into the future somewhat, despite it being a species with such a short natural lifespan, said Bardarson.

The autumn survey and winter survey will be used to project the stock size and includes remeasuring.

Methodology for measuring the capelin stock remains the same, but the acoustic measurement equipment is now more sophisticated.

“But what has changed is that instead of going out (for measurement surveys) with one or two research vessels, we have been using the very well-equipped fishing vessels which have very advanced aqua sounders,” explained Bardarson. “We have been able to measure with seven or eight vessels at the same time.”

This helps during winter surveys when there is a short time weather time frame for undertaking work.

Climate change has “quite obviously” had an impact on capelin migration and abundance, said Bardarson. “We have seen the distribution and migration pattern change a lot. The capelin is now much more westerly and northerly. It is living on the edge of the Arctic front, sea ice distribution has reduced a lot. Even though we don’t know exactly how, we can assume it affects the capelin a lot.”

The outlook for the 2022-23 season is not yet certain. “The advice for the next season is still under the review of ICES, but if the measurement is accepted then we are likely to be hitting the roof with harvest as we did with this year as well,” declared Bardarson.